We ate a lot of potatoes this past week.  Purple potatoes, sweet potatoes, and finally these mashed potatoes.  Mashed potatoes scream comfort and comfort food is what we go to a lot for Sunday dinners.  I don’t know what it is with kids, but mine LOVE mashed potatoes.  It is always one of those sides everyone is happy to have on their plates.

These mashed potatoes have a twist that won’t make you feel guilty for eating them or giving large heaps to your kiddos.  There is no butter or cream in these potatoes, but they are still creamy, tasty, and kid approved.  There is an extra step in roasting the garlic, but it is ridiculously easy for the amount of flavor it adds.

Place the head of garlic in an oven proof dish and drizzle with 1 Tbsp. of olive oil. Roast the garlic in a 375 degree oven for 25-30 minutes. 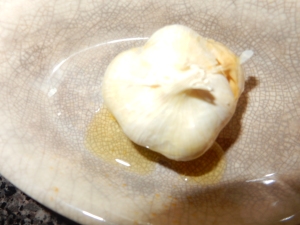 Remove from the oven and set aside to cool.  Place the diced potatoes in a pot of water and boil until tender.  Potatoes are done when you can easily mash with a fork.    Drain the water from the potatoes.  Squeeze the roasted garlic from the cloves into you potatoes.

Add the remaining 4 Tbsp. olive oil, parsley, broth, salt, and pepper.  Mash the potatoes with a potato masher or whip with a mixer. We had these alongside our pork tenderloin and Honey Balsamic Kale.

For a while my son couldn’t have rice or wheat, and potatoes started sneaking more and more onto our menus. It’s a good thing they are pretty versatile.  I am a huge fan of the simplicity of roasted potatoes.

We usually roast red potatoes, and fingerlings are always good too, but my littlest is currently obsessed with the color purple.  This past week at the grocery store she spotted these beautifully hued baby potatoes and asked very nicely if we could buy them.

Boy, am I glad she did!  The kids were enamored with the deep color and we were all smitten with the taste.  The texture after roasting was almost velvety.   These were such a nice side for our salmon the other night.  I will definitely be splurging on these delicious spuds again.

Try not to eat them too quickly!

I may not plan many things, but I’m a menu planner.  Planning my dinners a week in advance helps save my sanity.  I usually start with a few ideas and then sit down with my children to see if they have any thoughts or wishes.  While I am the final decision maker, when I include my kiddos, they take ownership of the menu and tend to look forward to the meals.  It’s not full proof, but it goes a long way in lessening dinner disputes.

We have a chalkboard wall in our kitchen and we post the weekly menus.  Everyone knows what to expect.  It cuts down on those last minute trips to the grocery store because we make the menus before our weekly trip.  I’ve often had friends ask me about sharing our menus.  I usually write our menus on Friday and today I thought why not share.

I try to cook enough to have leftovers some days, so we won’t usually have 7 meals listed over 7 days.  This week we’ll be eating the following :

Tuesday- Red Beans and Rice with Salad and Cornbread

Friday- Something with Shrimp ( Every now and then I’m not super specific.)

My goal is to update the blog with recipes to go along with the menu throughout the week.

How do you plan your dinners?

I am a Louisiana girl who lived in Texas for a big chunk of her adult life.  The first Texas dish I had was a stuffed BBQ potato.  The flight attendants on our flight to secure housing were  talking about how they had to get a potato before their next flight. One person thought they wouldn’t have enough time, and another made it clear that leaving Houston without one was not an option!

Always interested in food and apparently not being shy, I had to know what they were talking about.  They couldn’t believe we had no clue.  How could it be that we had never had a huge potato stuffed with the BBQ meat of our choice and then loaded with all the traditional fixins’? Yes, I wrote fixins’. We had been missing something.

This recipe is a nod to those great potatoes.  The basic flavors are there, but it’s made in a casserole dish, so it makes it easy to feed a family of five and with leftovers no less!  Carrots were not a part of the stuffed potatoes, but I added them to this recipe in case we wanted a one dish meal.  We often eat it with a salad or other green, but if I’m lazy, I don’t feel bad because there are vegetables.

Peel and dice the potatoes.  Boil over medium high heat until tender.  Drain and set aside.  While the potatoes are boiling, brown the ground meat in  a large pan.  Add the chopped onions and carrots to the ground meat.  Add a little salt, pepper, and garlic powder. Cook until the onions are translucent and the carrots are tender. 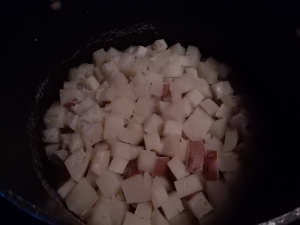 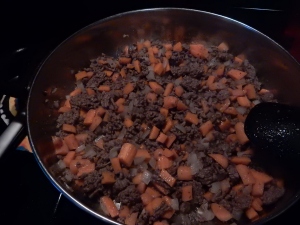 Add the butter and chicken stock to the drained potatoes and start to mash.  Add the chicken broth 1/4 c at a time.  You want the potatoes to be smooth, but thick enough to hold up the meat.  Add salt, pepper, and garlic powder to taste.  Add barbecue sauce to the cooked meat and carrots.  Stir to combine and remove from heat.  Now it’s time to assemble.

Layer the dish starting with the mashed potatoes.  Add a layer of the meat mixture and then top with cheese.  Repeat the layers a second time. Top the last layer of cheese with crumbled bacon and bake in a 350 degree oven for 15 minutes or until the cheese is melted and bubbly.

I have a little one that cannot eat cheese, so I either fill one casserole dish with one half with cheese and the other half without, or I make her a separate dish.  I’ve even made her a dish with soy cheese.

Garnish with the sliced green onion.  If you want an extra creamy tang, top with a dollop of sour cream or plain greek yogurt.  Stuffed potato taste in a casserole!  Enjoy… then take a walk.  😉